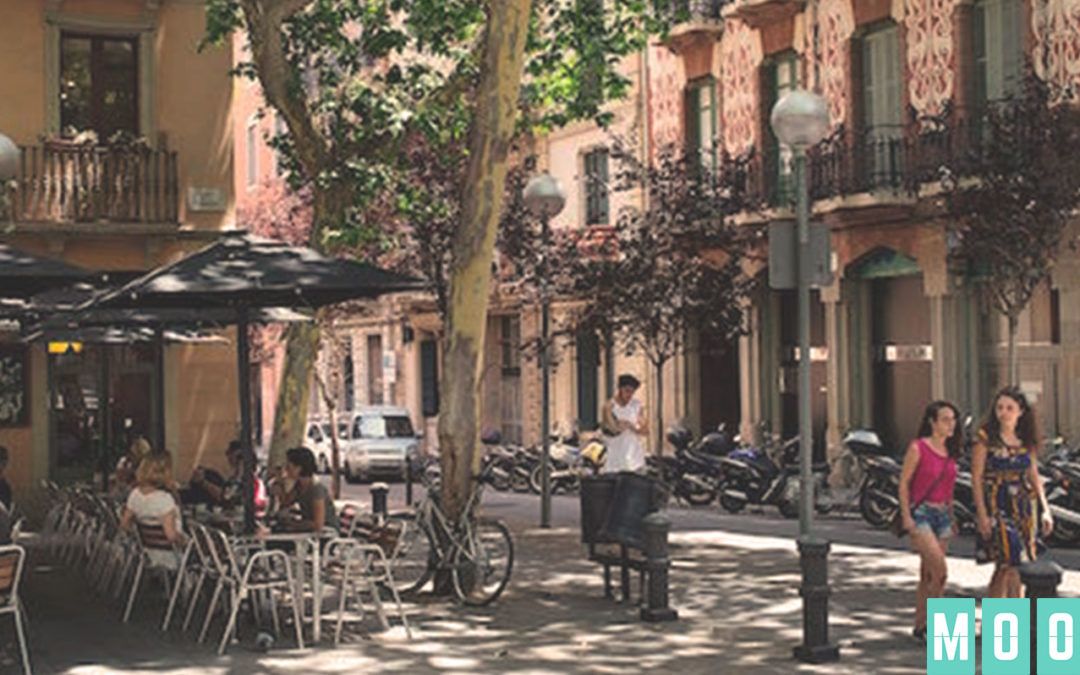 Going out for drinks in the Gràcia neighborhood often means taking a walk around the Placa de la Virreina. Surrounded by three streets where there is no traffic, it is the perfect place to find a bar and meet friends. And the best part: it is only 170 meters from Elephanta!

The name of the square originates from the old town and palace where María Francesca Fiveller de Claresquí i de Bru, better known as the “Virreina”.

Why is it so known? The answer is more than logical: for being the wife of a Viceroy.

Manuel d’Amat i Junyent, of Catalan origin, was governor of Chile and Viceroy of Peru until 1777. Back in Spain and at age 75, in 1779 he married María Francesca, a young woman of just over 20 years of age, Belonging to an important Barcelonian family and who, before her marriage, had been a novice in the convent of Santa María de Jonqueres.

The circumstances of the marriage are unclear. Don Manuel is said to marry Maria Francesca in a kind of reparation of the young woman’s honor… because the wedding should have been with the viceroy’s nephew, Antoni d’Amat. But for unknown reasons the boy never did his part and Maria stayed with the uncle, a man much older than her but of great fortune.

What is known is that the viceroy was a man who liked to show his status and show off his money. For this reason, he ordered the construction of two large palaces. The first on the famous Rambla de Barcelona known as the Palau de la Virreina, is a wonderful example of Catalan Baroque and belongs to the Barcelona City Council.

The second, in Villa de Gracia. A palace built as a summer house for the married couple and, it is said, was even more imposing than the one located in the center of the city.

Keep in mind that the town of Gràcia in those years was fundamentally rural, land of farmhouses and orchards. With the Industrial Revolution and the arrival of the 19th century, the landscape changed. But in those years of the late eighteenth century, the viceroy took control of a more than considerable “little land”: from Travessera de Gràcia to Carrer Providencia, and from Torrent de l’Olla to Torrent d’en Vidalet.

Unfortunately, poor Manuel would not be able to enjoy his new properties. Only three years after his marriage, he died. And the young viceroy was the one who could enjoy such a legacy. Hence, we all know the Rambla palace and Gràcia square with her name and not with that of her husband.

The roles it fulfilled.

María Francesca died in 1791, and from that moment, changes would begin in what had been her estate in the town of Gràcia.

It previously was the residence of a religious order and, later, of French people who escaped after the Revolution in the neighboring country. Also, it became a hospice to care for yellow fever patients in the early nineteenth century.

Then came the decline and finally the destruction of the palace.

The lands began to be redistributed and urbanized, and in 1878 the architect Josep Artigas i Ramoneda built the square that we know today. Located precisely in the place where the palace of the viceroy was.

It’s a shame, but almost all vestiges of that incredible building have been lost. Its stones are believed to be part of the church in the plaza today

However, there is a piece that can be identified as part of the old palace. Yes, only one that we encourage you to look for on the right side (if we look at it from the front) of the Sant Joan church.

There, there is an original tile where they are represented, which are supposed to be, the viceroy and the “virreina”, in some medallions. And here comes the legend: they say that if you stop at midnight, in front of those medallions, and you repeat “Perricholi” three times, the name of the lover of French Mary, the face of the viceroy gets angry!.

Last important fact: this church (the parish of San Juan Bautista de Gràcia) by itself is quite special. If you are one of those who look for the traces of Gaudí throughout Barcelona, you cannot miss the parish of Sant Joan.

At the time when the architect lived and worked in Parc Güell, he used to walk down every morning to pray in this same church, on his way to the Sagrada Familia. He did it with his partner and right hand, Francesc Berenguer, who is credited with building the chapel of the Blessed Sacrament which is in the basement. However, in 2016, Josep María Tarragona, researcher of Gaudí’s work, questioned this statement and presented evidence to demonstrate that the chapel was actually the work of Antoni Gaudí himself. There is no official confirmation of his hypotheses, but it certainly does not stop adding more attractiveness to such an emblematic and beautiful place in the Gràcia neighborhood. 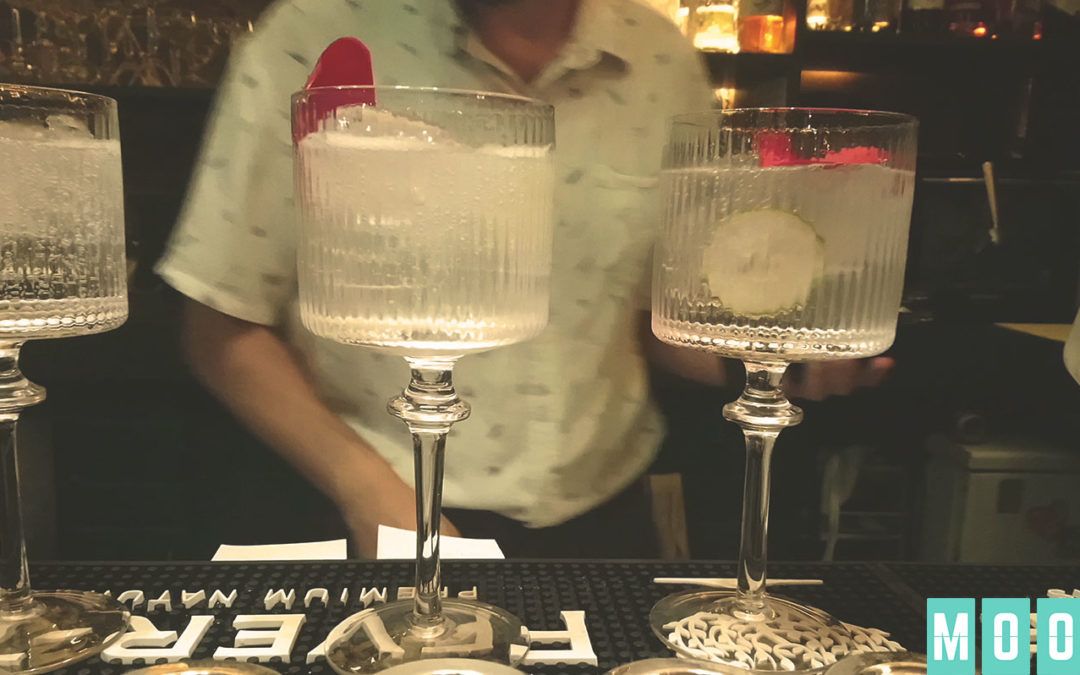 This is a cocktail bar specialized in gin-tonics that we met one day in the heart of the Gràcia neighborhood, and that stands out for its cozy and elegant atmosphere, for the variety of products but, above all, for a warm and personalized service that makes you come back again and again.

It was during Mariela’s first birthday in Barcelona. We were visited by Ariel, a friend who lives in Argentina, and we went out to celebrate in the streets of Gràcia, our neighborhood in those days.

Towards the end of the night, we were looking forward to one more toast and Elephanta appeared in front of us: a small place, with dim lighting, comfy chairs, low tables and a relaxed atmosphere with good background music to continue talking with whoever is with you.

Special paragraph for the bar: situated at the end of the room, full of different colored jars and bottles that called us to get closer and order a gin-tonic. So we went in, tried it and it didn’t disappoint.

Because not only is the place attractive, but the people who serve you are super friendly and the cocktails are great.

So we came back. And we presented the place to more friends. And it even became a “tradition” with some of them: every year, when our dear friends Tony Sersale (amazing music and singer, listen to Tritón for example) and Lucre visit us, there is always a night at Elephanta, with those glasses that we like so much.

One of those nights…

On one of those nights, we sat at the bar. We had arrived at a critical time and the place was packed, with groups of friends and couples, like us, looking for a drink after dinner.

And those stools at the bar that we were able to sit on allowed us to meet Pau, one of Elephanta’s bartenders. We have already said this before, but in case you are just getting to know us, I tell you that we are talkative people. Especially if there is atmosphere and a few drinks to accompany.

So, we started talking to Pau, obviously about gins.

Varieties, aromas, different distillations, rarities, pairings… He showed us a world that we barely knew, and made us feel so comfortable and welcome, that we fell in love.

And it’s not that we were lucky that day, and Pau was just in a good mood.

Because those who work at Elephanta are passionate about what they do, friendly and professional people, who want you to not only have a good drink, they want you to also have a unique experience.

And then of course you come back. Needless to say, it worked with us.

The “birth of the elephant”

It was in 2008 that Elephanta opened its doors as a cocktail bar.

Its owner, Nuria, was coming back from a trip to Latin America and had decided to change course in her working life. In that new search, she opened this cocktail bar, inheriting the name of the tearoom that used to be right there. And while Elephanta initially served the typical variety of alcoholic beverages, it was Nuria who thought of prioritizing gins, long before they became fashionable everywhere.

When the gin-tonic fever was getting higher, Elephanta already had its little place in the nights of Barcelona, and it finished establishing itself as a benchmark in the world of gin.

In 2014, the renovation of the premises arrived, to finish giving its identity: a small, warm, intimate, elegant space. And people never stopped coming in since.

If you are a knowledgeable and a great gin-tonic taster, this is your bar. And just so you don’t get bored, they offer you the opportunity to try something new, renewing their menu often. They also offer a new gin every month, so do not hesitate to ask for it because it is usually out of the menu and always worth it.

And if you don’t know anything about gin-tonics, you have hardly tried them and you have no idea where to start, this is also your bar. You will always have the best recommendations, they will know how to guide you, taking into account your tastes  and we recommend you trust the staff of Elephanta, because they know what they are talking about.

Even if you can’t decide on any of the drinks, they have an alternative: a tasting of 3 different gins. No worries, that is not 3 measures of gin: it is 1 measure, divided into 3 different proposals. And, as Pau has told us, it is the best way to take risks and try something new.

If you are one of those who like to discover new places, cozy, beautiful, with a good proposal and a great vibe, Elephanta is your next bar. Who knows, maybe we meet there sometime. Because as I already told you, we always come back.

When you visit Elephanta, and you have already enjoyed both its hospitality and its delicious cocktails, do not miss Plaça de la Virreina, it is close and you will like it.

Here is the information for you to find the place when you are in the Gràcia Quarter: