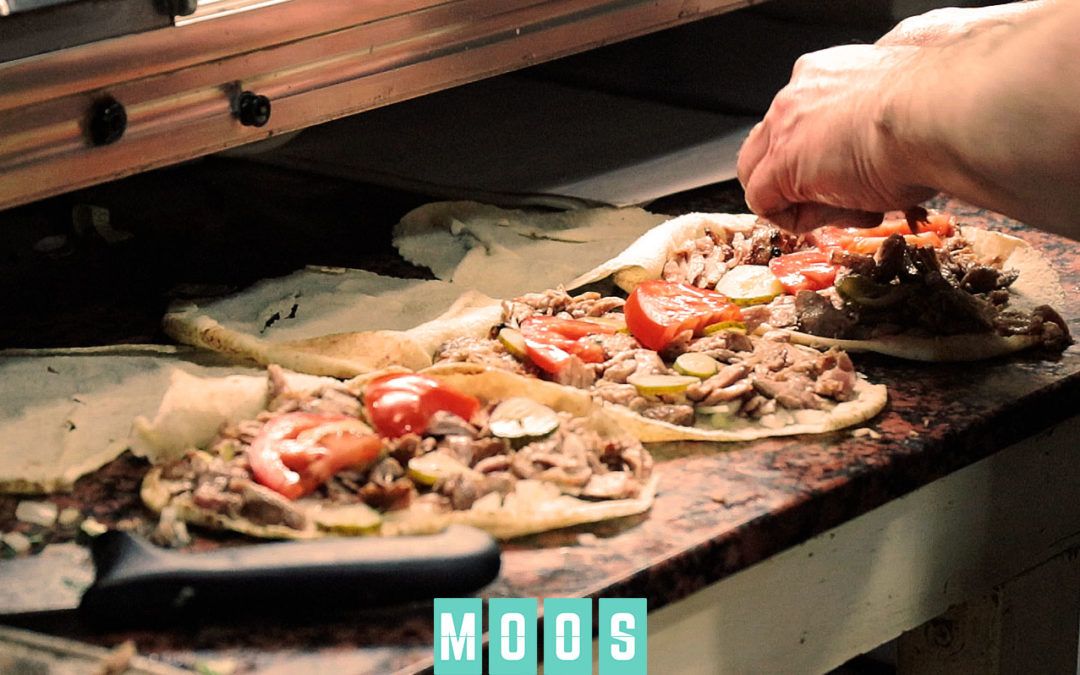 A few meters from the Barcelona City Council offices, behind wooden doors filled with Street art, is “El Cuiner de Damasc” (Carrer dels Templers 2), recognized throughout Barcelona as the place where the best kebabs are served. Fresh products, homemade preparation and the best vibe of its people, will have you come back more than once.

Our friend Facundo, an Argentine who came to Barcelona more than 16 years ago, had told us: “The best kebab in Barcelona is in the Placa Sant Miquel”. And if someone affirms something so emphatically, especially if it is food, we are going to check it out.

The truth is that Barcelona is full of places like this. A kebab for a good price is the ideal proposal when you are hungry and not on a big budget.

Or in a hurry and looking for a two-course lunch and dessert (same goes for dinner).

We confess we have tried several kebabs, that’s why we were intrigued by this place, so centric and so recommended. And I say “so recommended”, because later we discovered that not only was Facundo a regular and a fan of these kebabs, but there were many more who talked about him. So, we went there one night to see if this place deserved so much praise.

So we reached the doors of “El Cuiner de Damasc”, at the corner of Carrer dels Templers and Carrer del Palau, in the Gothic Quarter. A few meters away is the Placa de Sant Miquel, with its famous sculpture paying tribute to the castellers and the Barcelona City Council.

There cannot be something more central in the city.

As soon as we entered we were greeted by a queue of people waiting to make their order.

Yes, there is a queue.

And yes, it can be long. The queue and the wait.

But it does not matter. Here at the Cuiner de Damasc you wait for how long is necessary. Because it’s worth it.

As much as to eat the best kebab in Barcelona.

Those who arrive already know that this is the possible scenario, especially if one goes in after 9pm.

The lucky ones who have stayed inside will receive their prize, which is buying and enjoying the best kebab in town. Those who arrive later will have to return another day, but earlier.

There are some places that achieve that fame and can afford to close, even knowing that there are people left out. Or even not having a large sign with your name on the facade for them to find.

The thing is that El Cuiner de Damasc does not need that. Their fame precedes them.

And their clients accept it. Because in return, this place offers you the warmth of its service, the freshest products and flavors that make you want to visit again.

At the end of the day, isn’t that what we are looking for in a good food place? It could be said that they know how to apply this infallible formula and it shows.

Their team and products

Salem is the owner, who arrived from Syria years ago, and who welcomes his customers. Sympathetic and sociable, he can be seen among the tables chatting with people.

Carlos and Carles are behind the counter, preparing and cooking the kebabs one by one. There is a phrase that Carlos told us when we met him, that sums it up: “I don’t have clients, I have friends.”

And it’s true. He makes you feel like a long-time friend, while putting all the dedication to that next kebab that will be yours in a few minutes.

The other key is this word: “homemade”.

They make everything, from the pita bread to the döner kebab that spins around against the fire, ready be cooked.

They prepare the combination of turkey and lamb meats themselves, which gets roasted. And it is Carlos who is responsible for ensuring that they are well done, juicy and pushed against the fire. Work and dedication.

And then came the flavor. Incredible.

Thanks to the perfect combination of bread, meat, vegetables and the sauce they prepare. At this point I am just speechless, and I do ask you to go and try it.

As our friend Facundo once told us: “Go and try it.”

We tell you the same, go and try it, do it and you will know what we are talking about.

If you are enjoying the kebab from El Cuiner de Damasc, walk a few steps and reach the Plaça Sant Miquel and then continue your tour of the Gothic Quarter, which you will love.

Here’s how to find the place if you are walking around the Gothic Quarter:

Links: it does not have any website or social networks 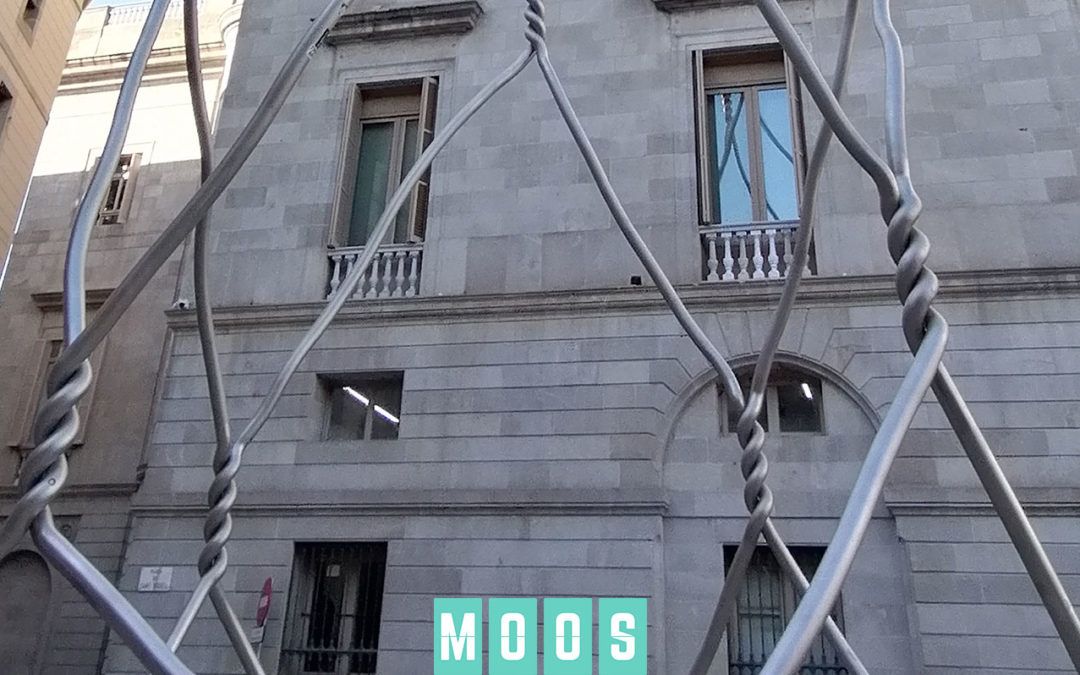 The Cuiner de Damasc, as we have already said, has an unbeatable location if you are visiting the Old Town of Barcelona, ​​and its heart: the Gothic Quarter. Although they have tables inside the premises, many also choose to take their kebab and eat it outside; and steps away, is the Placa de Sant Miquel, a large space to enjoy the sun and make yourself comfortable.

In fact, its configuration is quite modern, if we think that this place has been part of Barcelona for more than 2000 years.

So let’s review the changes a bit: in Roman times, some hot springs were located in this same square. But after the empire ended and with the consolidation of Christianity, the same space was occupied by a Romanesque church that was built on the structure of the Roman building.

The name of the current square comes from the name of this church, which was the Sant Miquel church.

The construction stood until its demolition in 1868, dated back in 1147, being one of the oldest churches in Barcelona. It is worth clarifying that before this, there had been another Romanesque church, which also was destroyed in 1145.

As the temple had been built on the bases of the Roman baths, the nave had the mosaics of this ancient construction on its floor, with motifs of fishes and monsters in black. Today, they are in the Archaeological Museum of Catalonia, for those who want to see them personally.

The 1147 Romanesque church underwent several renovations throughout the centuries. In the 16th century, a Gothic-Renaissance door was added on one side, which had the image of Sant Miquel on the tympanum.

In 1868 the demolition of the church was decided in order to expand the City Council offices, which ended a year later.

The church was “dismembered” and some of its elements can still be seen in Barcelona. For example, the Gothic-Renaissance façade is today part of the Church of la Mercè, in Carrer Ample. If you look closely, you can see on the stones the numbers that were used to identify the order of the stones, used in the transfer process.

Today, in the middle of the square, we see a sculpture that is very significant for the Catalan culture, but which generates some confusion at first glance.

More than one thinks they see a fence or the wire mesh that covers the champagne or champagne bottles. And if you are one of the latter, in reality, you are not so disoriented.

According to the sculptor, Antoni Llena i Font, the idea for this work came to him one day when he was buying wine and he saw it. He thought that “it was a very nice abstraction to make the castle, because it contains the idea of ​​cohesion, fragility, transparency.”

Now, you may be wondering: what “castell”? Well there we go. One of the Catalan traditions that we like the most, and that is repeated every time there is a party in the cities and towns, is that of the Castellers: human towers, human castles, built on the basis of trust, cooperation, solidarity and a lot of effort.

And they represent what we can achieve together as a society, if we collaborate and put the best of each other for that common good.

The sculpture by Antoni Llena i Font is called Homenatge als Castellers, and although it was an idea in development since 2004, it gained momentum and materialized with its inauguration in 2011. And this materialization occurred because a year before the castellers were recognized as Intangible Cultural Heritage of Humanity by UNESCO.

The work consists of 12, 10cms diameter stainless steel tubes, which intertwine until reaching 26.5 meters in height. At the same time, it represents the fragility and strength of a castle.

If you are far from Catalonia, we invite you to watch a video of one of the castellers performances on YouTube (you will find hundreds of videos). But if you are lucky enough to see them live, in these lands, do not miss the opportunity. It is a more than exciting show and always takes place around celebrations and parties.

And if you are truly willing to know this world of the castellers, we promise we will make a video about them, so you can know them more thoroughly. A promise is a debt.