Barcelona’s beaches are the perfect escape for those who live here or visit the city, especially when hot days come. But this life of leisure, sand and sea that today is so familiar and natural to us every summer, did not begin until a little over 150 years ago.

Today we travel to the past to see what it was like to “go to the beach” in that Barceloneta.

Summer. Heat hovering around 30 degrees. Stinging sun on the skin. And one single wish: entering the sea, fresh and refreshing.

Afterwards, rest on the sand, listening to the mesmerizing murmur of the waves.

Around the world, the idea of “vacation” is always closely related to a season by the sea. “Going to the beach”, relaxing or practicing a sport in or near the water is what we look for, when we decide to go to the coast to enjoy a well-deserved rest.

Barcelona is a magnificent city that offers its visitors art, culture, history, gastronomy, nightlife… and the beach!

It has that privilege, that of allowing us to escape from the rhythm of the city to enter the world of swimsuits, umbrellas, the sun, the sand and the sea, just with a trip by subway or a few minutes of walking.

There, right in the Ciutat Vella district, next to the old town, is Barceloneta, born and raised next to the Mediterranean.

And that same Mediterranean sea is the key to Barcelona’s past, to its growth, to its openness to the world. The port was the great protagonist. And the commercial life of the city revolved around him.

But they were not those years of bathing or leisure on the beaches. That would come a long time later.

It was only during the 19th century that society discovered and turned bathing in the sea into a leisure activity. And Barceloneta would be one of its main stages.

At the end of the 18th century and the beginning of the 19th century, a new “fashion” began: bathing in hot sea water for therapeutic use and the beach as a new place of leisure.

The more affluent classes then began to visit the coastal areas of France and Italy … and also reached the sea coast of Catalonia.

And, of course, Barcelona.

Now, when they “go to the beach” they do not enter the sea to bathe, as we do today. That was quite unusual and, if anything, only practiced by the more popular classes.

These visitors looked for bathhouses on the beaches: establishments built near the sea, where they could take baths in “picas” or small bathtubs located in cabins.

These baths could be hot or cold water, drawn directly from the Mediterranean.

There are already records in the 20s, of the 19th century, of three bathhouses in Barcelona. One of them, precisely in Barceloneta.

It was known as Can Solé, because it was located in the orchard that bore the same name. It opened its doors from June 10 to the end of October and depended on the Casa de Caridad.

It offered fresh and salt water baths, cold and warm and over the years, it would be expanded and its facilities would be improved. For example, the “picas” made of marble, a lounge and a cafe.

As it was far from the city center, and crossing Barceloneta in those days was not as “touristy” as it is now, it also included its own transport service from today’s Placa d’Antoni Maura, which was known as Sant Sebastià, to the bathhouse.

Hydrotherapy equipment, a steam engine to capture sea water, a garden with springs and even a terrace with views of the sea, were services that were added as of the middle of the 19th century.

But Can Solé will not be alone. During the decades of the 50s and 60s of the eighteen hundred other bathhouses will open their doors, such as the Shipyard o Sant Miquel.

With neoclassical architecture, these establishments had a lobby or lounge from which two wings emerged: one for men, and the other for women. A corridor separated them, along which were the cabins with marble or wooden bathtubs.

The final closure of Can Solé will arrive in 1861, when its facilities are purchased to expand those of La Maquinista Terrestre y Marítima, an important metallurgical company located in Barceloneta, and of which there are still traces in the neighborhood today: one of its streets It bears his name (La Maquinista) and the entrance arch to the factory is still standing.

Around the same time that Can Solé disappeared, the first booths and barracks began to be installed on the beaches. These were assembled and disassembled every summer. The infrastructures will grow and add more services to users, such as restaurants, floating baths and gymnastics equipment.

In 1870, going to the beach had less and less to do with health and more with leisure, taking care of the body and the practice of swimming.

It is in this context that the most important baths in Barcelona would emerge: the Oriental Baths. Recognized as the best in Spain and one of the most important on the continent, they were built in 1872 following the project of the architect August Font i Carreras.

It consisted of a building with neo-Arab airs that had 50 bathtubs, duly separated between men, women and families. Luxury was visible, for example, in materials such as Carrara marble in hydrotherapy facilities.

For the year 1876, it was decided to add a wave sector that entered the water. This section was protected with a wooden structure and allowed bathers to perform gymnastic and swimming acrobatics in the water.

A year later, two 20-meter long indoor pools were inaugurated, which were illuminated by the recent electricity that arrived in Barcelona at the end of the 19th century.

And, how could it be less, they also had a tram service (first drawn by horses, and later electrified) to link the center of the city with the famous baths.

Barceloneta has changed a lot since those distant years. And the seafront much more. There are no more bathhouses and going to the beach is more democratic and popular than ever.

Manners, clothes, customs and customs have changed. But it is curious to imagine, while you are lying on the beach listening to the crashing of the waves (and the odd “cerveza-beer” vendor), those times when this hobby was born, which today is a pleasure for many.

The origins of Barceloneta: Maians Island.

Vestiges of the red zone in medieval Barcelona

Icon of Barcelona, it is one of the most photographed monuments of the city. https://www.youtube.com/watch?v=owbZir6Csl8&feature=youtu.be Nowadays it is the access to Passeig Lluís Companys, a place full of life. But the Arc de Triomf (or Arc de Triunfo) was the...

The Gothic quarter of Barcelona, ​​between Vía Laietana and the famous Rambla, is the heart of the city’s development. A convoluted tour of the streets and some small squares represents this beautiful neighborhood, where there is much to discover. Religious... 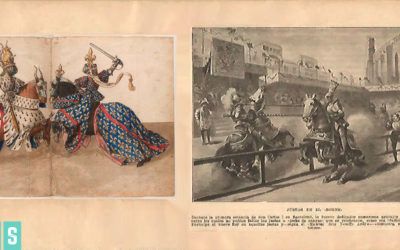